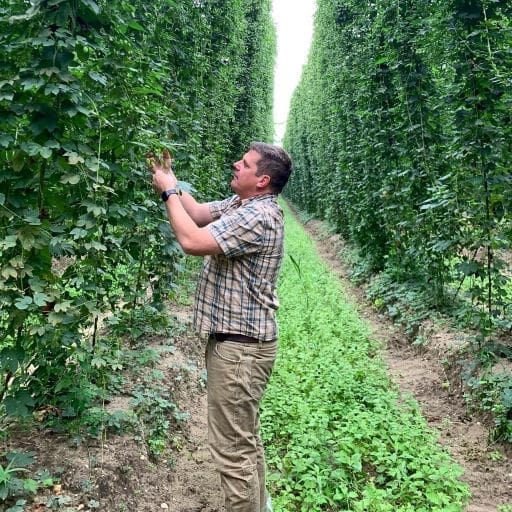 Germany and the Czech Republic, the world’s second and third largest hop growing regions (in terms of acreage), both experienced hop yields significantly below historical average yields and down even more significantly versus 2021 crop year. German yields have been estimated to be down 18% vs. historical average and 20.5% vs. 2021, while Czech yields are estimated to be down by more than 40% year-on-year. The challenging hot and dry growing conditions experienced by growers this season has resulted in extremely tight supply and little-to-no spot availability for certain in-demand varietals, such as Mittelfrüh, Hersbrucker and Tettnang.

German Growing Recap Based on Discussions with Our German Growers

Winter temperatures were slightly warmer than average with sufficient precipitation winter through early spring.  March and April were drier than normal allowing spring field work to be completed, though training did not get started until early May, a little later than normal, but warm temperatures and good growing conditions allowed the plants to catch up a bit in their development.  There was a hailstorm late in the month that affected 500-700 hectares to some degree. June was significantly hotter than normal with sporadic and insufficient rainfall that began to generate concern with the industry. Another hailstorm passed over the Hallertau in late June inflicting varying degrees of damage across 1,200 to 1,500 acres. Unfortunately, the unusually hot and dry weather conditions persisted throughout July affecting plant and cone development. These conditions lasted well into August until there was finally some meaningful precipitation in the Hallertau, but it was too late to have any real impact. Earlier varieties were hit hardest, particularly Mittelfrüh, Hersbrucker, Spalt, and Tettnang with yields being down up to 40% vs. prior year for these varieties. The later maturing varieties fared a little better with the August rains, but alpha percentages were down.  Since many varieties are traded on a kg. to alpha acid basis, suppliers have had to allocate more kgs to fulfill contracts, thereby further reducing spot availability.

Tom Malover, Senior Account Manager & Procurement Specialist, and I just returned from a week in Germany and the outlook there was dire. We visited our direct growers and our primary merchants and cooperatives. The abovementioned climate conditions had a near catastrophic effect on the crop.  We anticipate under-delivery against our Mittelfrüh and Hersbrucker contracts of approximately 25-30%, but we hedged our sales in anticipation of this under-delivery (Hersbrucker is still available to contract, but quantities are limited). There will be no spot market crop 2022 for these varieties. We inquired about previous crop availability, specifically 2021, as it was quite good, but merchants are holding remaining stocks in expectation of using those hops to fulfill their 2022 commitments.

2023 is a year that will likely require many brewers to get creative, innovative, and be flexible regarding their European hop usage. Here are some suggestions:

Zuper Saazer is HHF’s Michigan-grown “noble” hop and is a no-brainer fill in for any shortfall on Czech/European Saaz, and the German traditional varieties. The original “Landrace” Czech Saaz has been around for centuries but is susceptible to disease and not particularly tolerant to hot and dry conditions. There is little to no irrigation (to my knowledge, none) in the Czech Republic hop industry so yields and quality are highly variable from year to year. With modern breeding programs, Czech Saaz has undergone nine successful iterations of cloning since the 1950’s and we’ve got a winner in Michigan. It’s disease resistant, adaptive to the climate, and a vigorous producer. It produces more “brewing value” than its European origins, delivering higher alpha acid and higher oils.

Hallertau Tradition is a cross between Mittelfrüh, Hallertau Gold, and Saaz and was bred as an agronomically favorable alternative to Mittelfrüh. This hop is a good alternative if a brewer can’t get Mittelfrüh, or as a supplement to stretch their Mittelfrüh position. The Tradition market is very tight, however we located additional true-to-type volume while on the ground in Germany that is now available for contracting.

Select was similarly bred to replace Spalt with favorable agronomics. It tends more towards a Saaz or Tettnang profile, than Mittelfrüh — a little more spice/herbal aroma than herbal/floral.  Like the Tradition market, the Select market is extremely tight however we are working with our contacts to secure some more in the lots that we favored.  Supply will be limited, so customers will need to move quickly to ensure availability.

As mentioned, with any of these recommendations, it’s important to consider that it needn’t be a 100% pound for pound replacement.  For example, if a recipe calls for 1 lb./bbl Mittelfrüh, the brewer can shift to ½ lb. Tradition and ½ lb. Mittelfrüh to stretch or maximize their existing position to until next year’s harvest.  Similarly, think about where and how the hops are being used.  Save the precious aroma for later additions, whirlpool, or dry-hopping and use a more readily available source of alpha acid for bittering.

As always, anyone on the sales staff or myself are happy to work with our customers to help them navigate this time of hop uncertainty.

Author: David Sipes is the Chief Procurement Officer for Hop Head Farms and a craft brewing industry veteran who has been both a technical brewer and hop procurement expert for Boston Beer Co.